The time has com 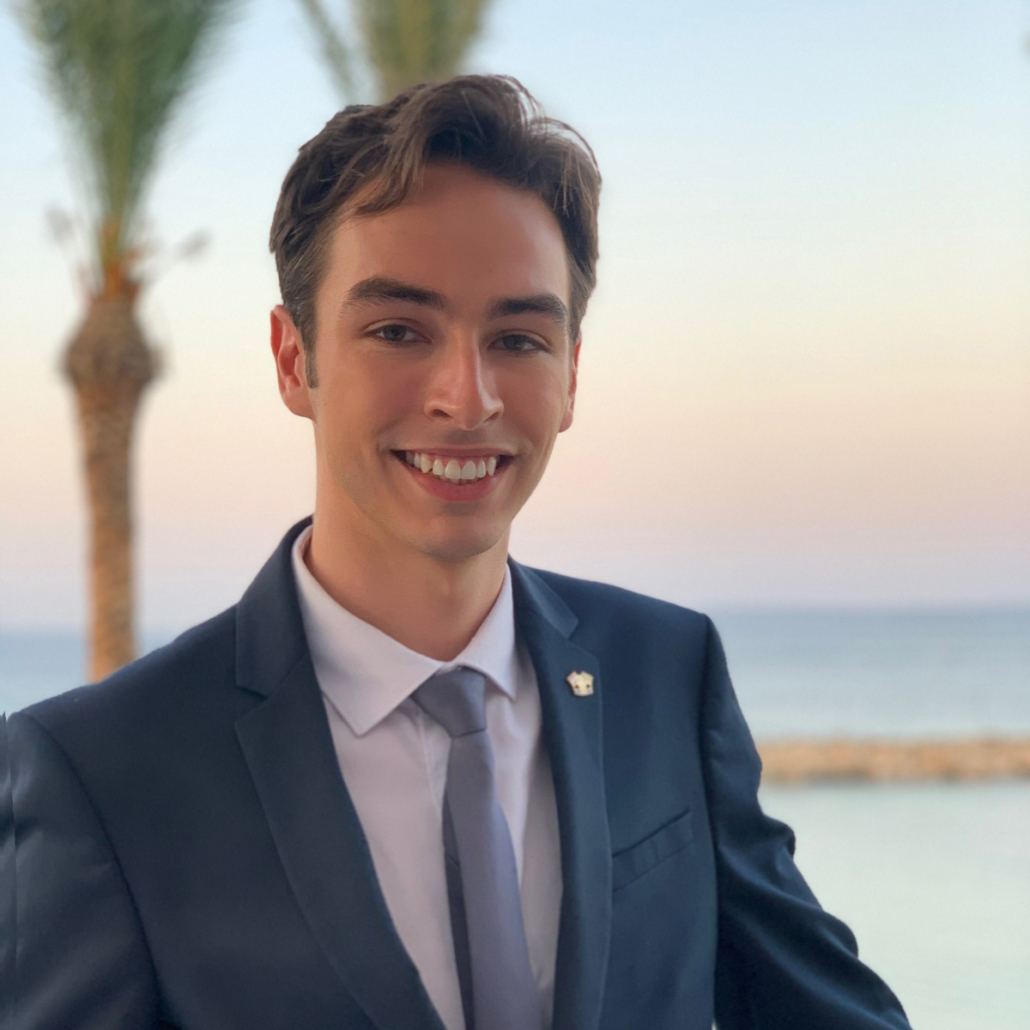 e to recognise our best Rotaract Club projects and initiatives and support local projects that have made the biggest impact in Europe. In this 2021/22 Rotarian year, Rotaract Europe has advocated for the inclusion of new areas of focus through which Rotaract Clubs can be rewarded and therefore introduced three new awards and a new awards category. Here are some main highlights from the best Rotaract Clubs in Europe and how they came to be selected for E.R.I.C. Social Awards at EUCO Riga 2022.

Starting with our brand new awards category, we have the Rotaract-Rotary Collaboration Awards. This category seeks to see in what creative ways have Rotaract and Rotary clubs partnered up for a common goal of organising a joint project or initiative and how has the relationship between the two partner clubs grown as a result.

The 3rd place winners are Rotaract and Rotary Istanbul-Beyoglu from Turkey. As the word Beyoğlu translates as “Son of a Bey” and refers to the Lodovico Gritti, who established close relations with the Sublime Porte, it seems fitting that the relationship established between the Rotary and Rotaract clubs mirrors this sentiment. Their joint project focused on economic and community development and disease prevention and treatment in order to create a fairer world for disadvantaged people. By providing essential needs of the homeless, such as clothing, shelter and food, they certainly achieved their set goal of serving to change lives. 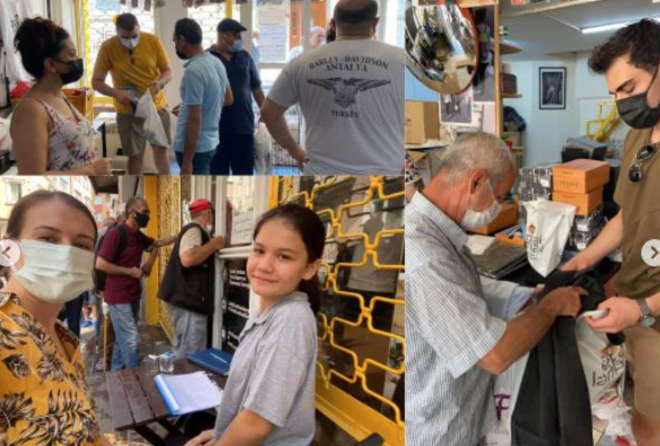 The 2nd place winners are Rotaract and Rotary Senigallia from Italy. Their project provided a visual inspection aimed at the early detection of amblyopia. It was part of a more general campaign to raise awareness and prevent these diseases. By educating the public on the issue of pediatric vision prevention through this initiative, these clubs were able to impact a total of 137 children and provide 36 of them with an eye examination and/or orthoptic examination. This club describes the partnership with their Rotary club as “beautiful synergy” and emphasises that it has allowed us to pursue a common goal, with the spirit of service above self. 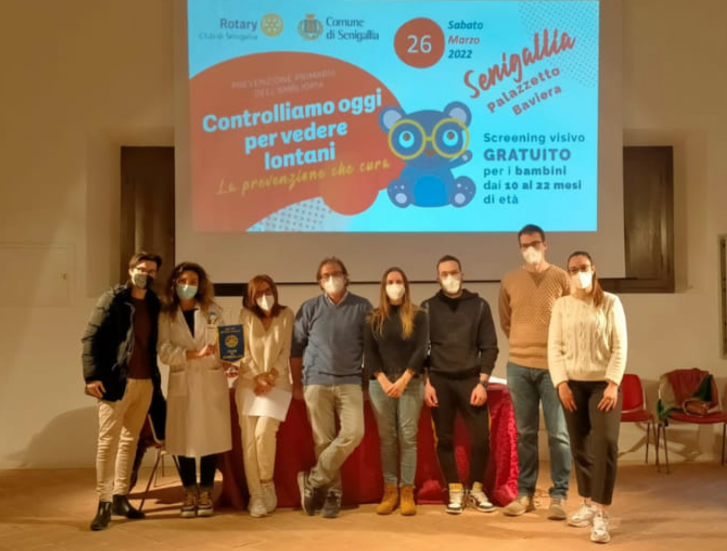 The 1st prize winners of the RRCA awards were Rotaract and Rotary Findikli from Turkey. The reason why the selection committee recognised the outstanding collaboration between these two clubs is their project Veni Vidi Auxili (I went I saw I helped). Fındıklı Rotaract Club was working on a project aimed at providing access to women’s sanitary products for two years. Because they were inspired to grow their project, they reached out to Fındıklı Rotary Club to collaborate. The project focused on Diyarbakır, a small village in Turkey. This project is especially important, as the Rotary club consisted mostly of men and they recognised the project goal as a necessity. This project also focused on providing other hygiene products to children and taught them how to care for their dental health. 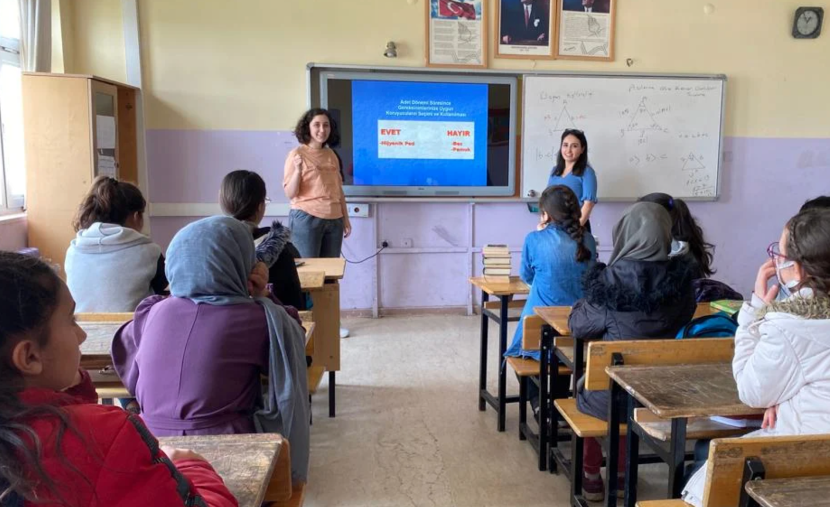 The Twin Clubs Agreement award is a familiar awards category for many European Rotaractors. Its purpose is to connect Rotaract clubs from within Europe and between Europe and other continents and MDIOs. The TCA looks at when the club twinning was initiated, what was the rationalle behind choosing a particular partner club and whether the twinning resulted in mutual projects or initiatives.

The 3rd place Twin Clubs Agreement award was given to Güzelyalı Rotaract club from Turkey and Rotaract Club Kardzhali from Bulgaria. According to the Rotaractors from Güzelyalı, “communication and collabration are very important in order to be a good twin club”. They emphaissed that building bridges that start from common ideas can only be possible with strong communication. Together, they got to know more about each-other’s cultures and produce joint service projects, since their paths crossed during the international project journey that started with the “Rotaract Around the World” project. This project entailed Rotaractors from each of the countries cooking their own local food, writing the recipe and filming the preparation of the food. Rotaract Europe similarly recognises the value in bonding through national cuisines, which is why no ERIC event is complete without a Country Booth presentation.

The 2nd place TCA was awarded to Guzelbahce Rotaract Club, similarly from Turkey as well as Rotaract Club of La Marsa Carthage. Their advice for a successful twinning is to search for a Rotaract partner club by first clearly identifying their interests, strengths, and weaknesses. Secondly, to consider clubs that hold similar interests, face similar challenges, possess expertise in an area that their club would like to improve, are located in a geographical region of interest to club members, share a common language or have resources available for translation/interpretation. Their tips and tricks together with the amazing project focusing on the prevention and treatment of diseases within the breast cancer awareness month these clubs organised made them stand out as a worthy Rotaract match. 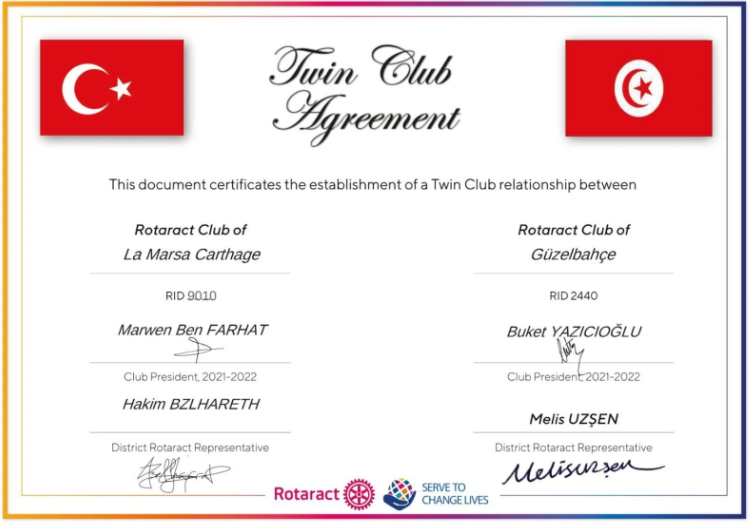 The best Twin Club Agreement in 2021/22 was concluded between Yeniköy Rotaract Club and Toulon Rotaract Club. According to the clubs, the most important thing that made their twinning special was that “two different clubs from two entirely different countries came together and tried to make a difference in the world” Together, they organised both online and physical events. From the communication and friendship between these clubs, one of the club members of Yeniköy Rotaract visited their twin club and felt that she was a part of their family. In the words of Linda Büyüksimkeşyan, in charge of the TCA, “We feel that we have a family in another part of the world”. A truly memorable experience we want to encourage between many other Rotaract Clubs in Europe and beyond. 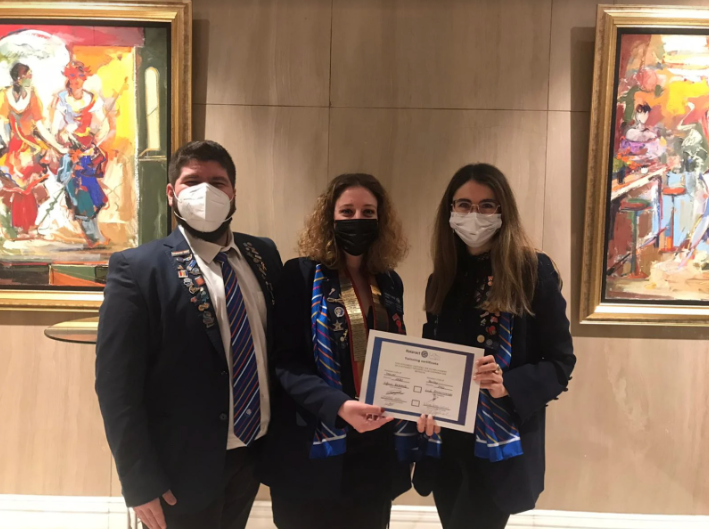 Finally, the award category every Rotaractor is surely curious about. The Best European Service Project award seeks to reward the best efforts in Europe by considering the biggest and most impactful Rotaract service projects. This year in particular, the competition was very tough, as so many clubs submitted their crown achievements for the year 2021/22. In the following section, you will get to meet the winners of the top three projects that stood out in particular, due to their engagement, sustainability and most importantly, service.

The 3rd place winner of the Best European Service Project Award is Etiler Rotaract Club from District 2420 for their project: “Qualified Children Books for Our Future”. Their emphasis on the future inspired them to take action today. The aim of their project was to ensure that children studying in disadvantaged areas have access to books suitable for their age, cognitive level and needs. The books were carefully selected one by one by a cilincal psychologist who’s specialty is early childhood development. The club partnered with Book Koala, a bookstore established to treat stray animals. This project also had a noteworthy focus on sustainability, which, combined with their desire to offer children an equal opportunity for preschool learning made this on of the outstanding projects in Europe that will hopefully contribute to the educadional development project beneficiaries in the longer future. 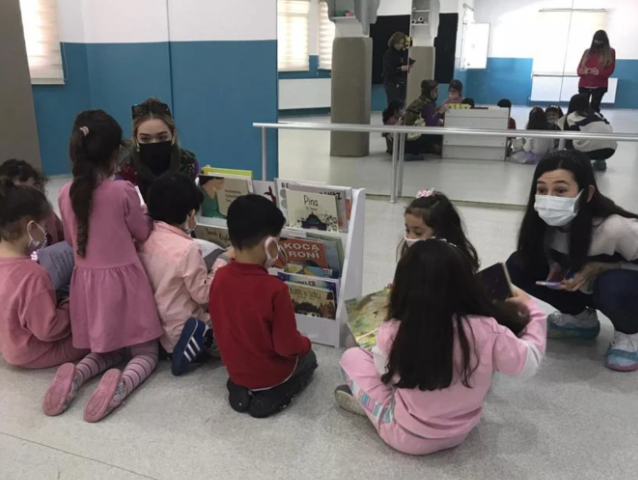 The 2nd place Best European Service Award winner is Rotaract Madrid from Spain for their project: “Rotaract Polio Race”. This club sought to involve as many European Rotaractors as possible by reaching out to Rotaract Europe in early-September 2021 and successfully promoted their initiative at REM Krakow. Rotary Polio Race is a project the Rotaract Madrid Club defends with great pride, because it was the first international project we have ever organized. The goal of the project was vaccinating all the children in order to avoid the uncontrollable proliferation of the Polio virus. In addition to the project raising a significant amount of funds, the challenges posed by the COVID-19 pandemic in organising this project make the efforts of Rotaract Madrid worthy of congratulations. 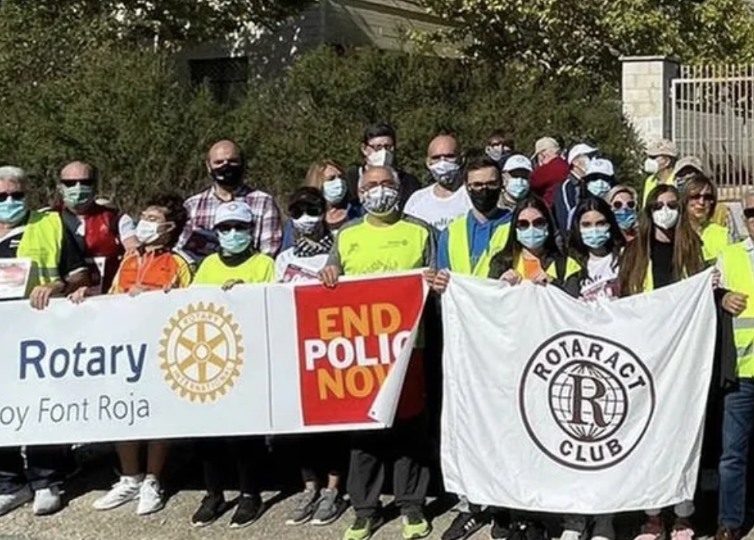 Finally, the 1st place Best European Service Project award was given to Rotaract Club Klagenfurt-Wörthersee in Austria for their project “Supporting Friends” in Ukraine. Within a short time, the club set up a fundraising campaign. In one weekend, they collected many donations from family, friends, and work colleagues including canned food, water, sleeping bags, generators, and medical supplies. According to Sebastian Adami, who fundraising campaign with a long-time club member Ivana Tadic and their club president Anna Bäuchler: “We were one of the first, if not the first, aid convoy from Austria to bring goods to Ukraine. We helped as much as we could without hesitating, and with the help of our Rotaract and Rotary contacts, the supplies arrived where they were needed”. Their efforts certainly did not go unnoticed by Rotaract Europe which wishes to encourage clubs across the continent to unite in solidarity for providing aid to persons who are most in need. 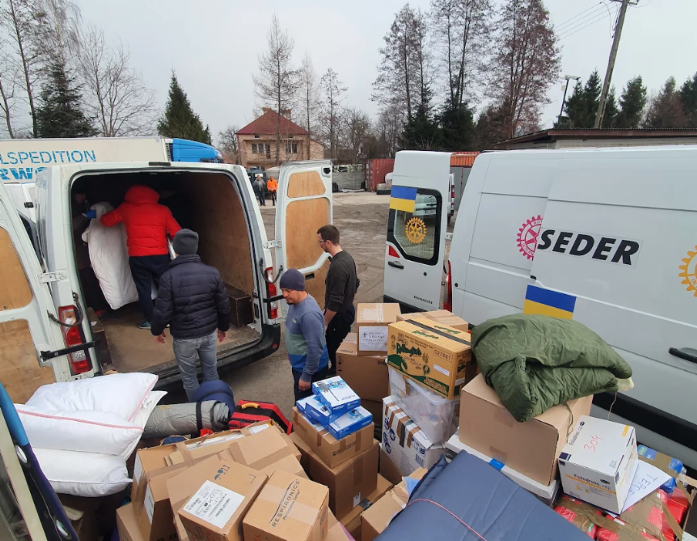 We would like to thank all applicants for their efforts and outstanding projects. Keep spreading the Rotaract spirit and values!

A story to remember